April is FIRST Robotics Competition (FRC) championship month! If you've been living under a rock and don't know about this cool program, it's a robotics competition designed to inspire young people to be science and technology leaders. Each year, students build robots that collaborate and compete with robots from other teams at local, regional, and national levels. FIRST uses NI technology at all levels of the competition to give thousands of students the opportunity to get excited about using technologies like LabVIEW and CompactRIO to solve real world problems.

This year's game is called LogoMotion – robots from different teams band together and compete with other teams to score points by placing inflatable rings on a scoring rack. At end of the match, robots score extra points by deploying mini-robots that race to climb a tower. Two JKI engineers, Philippe Guerit and Justin Goeres, are mentoring FIRST teams this year, and both teams have qualified for the FIRST Championships in Saint Louis April 27-30!

For this last seven years, Philippe has provided expertise and LabVIEW guidance to Team #766 in Menlo Park / Atherton, California. On this team, most of the students choose to participate for their entire four years of high school, and since the team has only one senior this year, they’ll be a strong contender for years to come. This year, they’ve participated in two competitions in Northern CA: Davis and Silicon Valley. They won the Sacramento Regional in Davis (in alliance with Teams 1678 and 1868), which qualifies them to advance to the FIRST Championship! Check them out in action here. 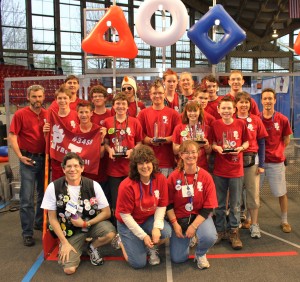 Justin is mentoring Team #3459 (Team PyroTech), in Cary, North Carolina. Team PyroTech brings together public, private, and home-schooled students from around North Carolina's Triangle area, along with professional mentors from a variety of disciplines.  Because none of the students or mentors have ever participated in FRC before, they're truly an all-rookie team with the motto, "We don't know what we're doing, but we're going to have fun doing it!"  That hasn't stopped them from accomplishing a tremendous amount in their first year, a journey they recorded and present in this video.  At the North Carolina Regional, Team PyroTech and their robot, Phoenix, won awards for Highest Rookie Seed and Rookie All-Stars (out of 17 rookie teams), which qualifies them to attend the FIRST Championships as well.

Keep your fingers crossed for our teams – and all the other students who are going to Saint Louis! JKI is proud to support FIRST and we’ll be cheering for all of tomorrow’s future innovators.  As Team PyroTech says, the robot is “just a vehicle” for the creativity, passion, and gracious professionalism that form the foundation on which FIRST is built.