'Twas the Night Before Christmas - A LabVIEW Holiday Story

A VIsit From St. NIcholas

'Twas the night before Christmas, and throughout JKI,
Not a creature was stirring, naught but idle VIs;
The LabVIEW front panels were laid out with care,
In hopes that St. NIcholas soon would be there.

The architects nestled all snug in their beds,
While visions of packages danc'd in their heads,
When near the build server there arose such a clatter,
I sprang from my bed to see what was the matter.
The soft, warming glow of its power-on light,
Gave welcome assurance that things were alright.

When, what to my wondering eyes should appear,
But a miniature sleigh, and eight tiny reindeer,
With a little old driver, so lively and quick,
I knew in a moment it must be St. NIck.

More rapid than gigabit backplanes they came,
And he whistled, and shouted, and call'd them by name:
"Now! Darren! Christina! AQ, and JP,
"On, Norman! On Brian, JeffK and Nancy!
"To the top of the porch! to the top of the wall!
"Now optimize buffers! Fix DAQmx calls!"

So up to the house-top the engineers flew,
With the sleigh full of add-ons - and St. NIcholas too.
As I drew in my head, and was turning around,
Down the chimney St. NIcholas came with a bound:
He was dress'd all in Wires, from his head to his foot,
His gloves, Notifiers! His boots, made of Queues!?

A Cluster of Classes was flung on his back,
And he look'd like a peddler Unbundling his pack:
He unfurled a long list of new secret features,
That promised to make engineers’ lives much easier.
He’d culled them all from his Idea Exchange,
Selected by voting, no matter how strange.
And new LabVIEW add-ons available quick,
From the LabVIEW Tools Network, in just a few clicks!

He launched VIPM and refreshed the list
Of available packages. And with a flick of his wrist,
He set to installing, without hesitation,
While I stood in amazement and anticipation.

He spoke not a word, for he knew what to do,
He fill'd up vi.lib; installed palettes, too!
Then laying his finger aside of his nose
And giving a nod, up the chimney he rose.

He sprung to his sleigh, and clicked the Run Arrow.
The sleigh took to flight, and away like a sparrow:
But I heard him exclaim, ere he drove out of sight -
Happy Wiring to all, and to all a good night. 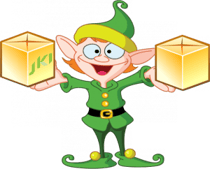 As the end of another great year arrives, JKI would like to take a moment to thank all of our friends in the LabVIEW ecosystem.  Without all of you, the LabVIEW community would be a less innovative, vibrant, and enjoyable place to work and play.

Happy Holidays from all of us at JKI!