JKI’s VI Tester is a LabVIEW unit testing framework that helps developers write and execute automated tests to guarantee their software components work as designed.  Although this usually means verifying that software components meet certain functional requirements, VI Tester can be used for creating other kinds of software tests, too.  Instead of finding bugs, these tests can do things like perform status and configuration checks on your software, and work around pain points in the LabVIEW build process.  Let's look at one example.

LabVIEW Checks for Broken VIs Late in the Build Process

Recently I was working for a JKI customer on a very large piece of LabVIEW software. The development team was trying to optimize the application's half-day-long build process. One of the problems we faced was that occasionally there were broken VIs in the build but it took hours before the LabVIEW Application Builder returned an error to notify us about them. This feedback was too slow, as often the new build was needed for the next day and starting another build meant several lost hours.

Our solution was to create a Test Case in VI Tester that tests if the application is OK to build (i.e. if any module's Run Arrow is broken). It provides nearly instant feedback to the development team because it runs as the very first step of the build process.  I’ll show you how we did it.

How to Quickly and Automatically Test Your Build for Broken VIs

How can you create a test case to test broken code, since doing so would cause the test case itself to be broken?

First, create an empty VI Tester test case class. By default, a test case class consists of three VIs: a setUp.vi, a tearDown.vi and a VI template for individual tests. You don’t need to worry about the setUp or tearDown steps in this test case; just use the default templates for these two VIs. Just create the test VI by renaming the template to something that begins with “test.” In this example we will call it testBuildTree.vi.

Second, we need to write the content of the actual unit test. The idea behind this unit test is very simple. We create a VI outside the test case class called BuildTree.vi. On the block diagram of this VI we place all the files defined in the Source Files section of your executable build definition (marked with yellow label in the illustration below). 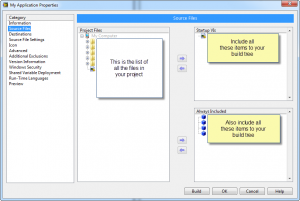 Verify That It Works